To Know Christ And Make Him Known

The Episcopal Diocese of Alaska

The Diocese of Alaska covers the entire state of Alaska.Members of Alaska's 53 Episcopal congregations share the Gospel of Our Lord from tiny subsistence villages to major metropolitan centers.  We have a land mass of 586,412 square miles with 47,300 miles of coastline, 3 million lakes and more than 3,000 rivers. Civilization has only encroached on about 160,000 acres of Alaska's 365 million acres. This is less than 1/20th of one percent of the State; the rest is still untouched wilderness, a frontier filled with awesome beauty and inexpressible faith.

Here, at The EDGE of a New Millennium, we are at the threshold of Evangelism and Discipleship through Gospel Engagement. We come together as a Diocese to focus on the Gospel and to see what God is calling us to do as individuals, as communities of faith, as a Diocese and as a "National" church.  We are led by our bishop, the Right Reverened Mark Latine.

Because of the vast size of Alaska the Diocese has been divided into 4 regions called Deaneries. Holy Spirit is located in the South Central Deanery.  This Deanery includes 14 congregations. The most remote congregation, Kodiak, lies on an island in the Gulf of Alaska. There are four congregations in Anchorage: St. Mary's, St. Christopher's, Christ Church, and All Saints'.  Holy Spirit Church in Eagle River also lies within the municipality. 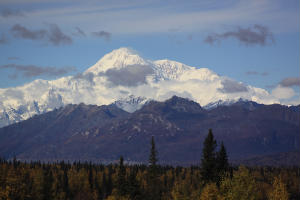 The Alaska Range dominates the geography of this Deanery and sports Alaska's tallest peak, Mount McKinley, so named in 1896 for William McKinley, who was at this time a candidate for president.   An earlier name had been Denali - a Tanaina Indian word meaning "the big one" or "the great one". The state of Alaska officially renamed the mountain "Denali" in 1975; however, the federal Board of Geographic Names had not taken any action and congressional legislation has been introduced to retain the name McKinley in perpetuity. Mount McKinley is the highest mountain on the North American continent.  The South Peak is 20,320 feet high.